The evenings demonstration by Mick Denton was turning of plywood. Mick had made up 2 blanks from glued together plywood. To add interest to the finished item the faces of the plywood had been painted black to create a black line once the edges were exposed. If you can get them you could also use powdered poster paints mixed in with the pva glue to make the coloured line. Another way to add interest is to cut the blank on an angle so that the finished item is not just rings straight across. 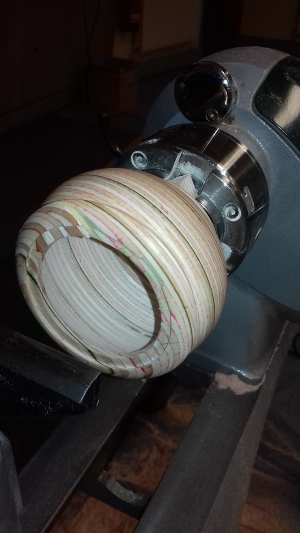 Primarily the turning is the same as for face plate orientation although working with plywood does result in tear out that needs to be managed. Another risk is that the gluing may not be solid and some voids may occur so additional ca glue and fillers may be needed. 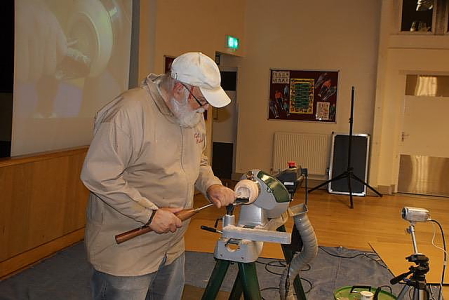 It pays to listen to your work as you turn it to pick up on any potential problems before they become dangerous. 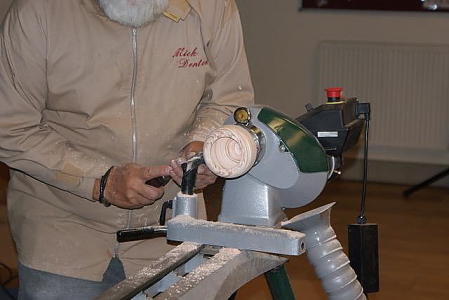 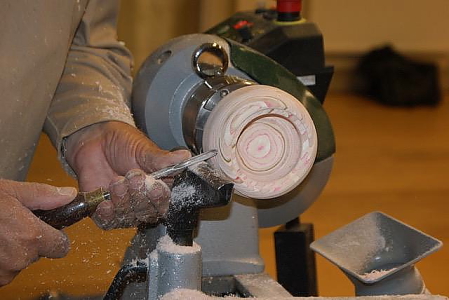 From a turning point of view the glue in the plywood really blunts your tools quickly so sharpening is a major concern during the process.

Mick made a pot pourri bowl out of the angled blank and the makings of a vase from the concentric blank. 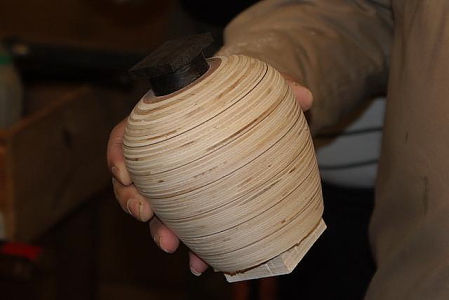 The turning proved to be entertaining with some banter adding to the evening.

Before the meeting got fully under way Doug Johnson made an announcement to the members that, for personal reasons, he has decided to resign from the club after 19 years of membership. Our Chairman, Mick Denton, thanked Doug for his years of service and input to the club and offered him an open invitation to visit any future meetings that he wishes as a guest. We all showed our appreciation with a warm round of applause.

Tonight was the turn of Gerry Marlow to demonstrate his skills and provide inspiration for something a little different. Gerry introduced himself and outlined a very ambitious programme for the evening which covered a very wide range of projects.

Firstly he was to produce an off centre turned goblet with a Perspex ornamental turned lid. The lid was created on one of Gerry’s home designed and built Ornamental turning rigs. Although this sounds a bit Heath Robinson ish the actual machine was far from it. 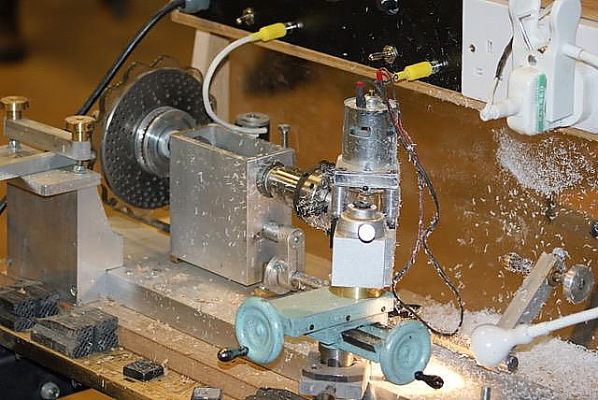 It allowed set ups to cut patterns with automatic indexing and feeds. Really it was an awesome unit although Gerry did say that he had made another rig that could also oscillate along the centre line. Mind blowing! Gerry’s comment was that he enjoyed the design and making of the machines more that the turning itself. Anyway, the Perspex blank was mounted using double sided carpet tape and he set the machine going and let it run whilst he set up the blank for the goblet. The tape held remarkably well.

The goblet blank was turned to a cylinder between centres and a tenon created for the chuck. However, as this was for an off centre project it was a tenon with a difference. Slightly deeper than you would usually create and then formed into a bead which when put in the chuck acted as a ball and socket to allow the off centre but still safely hold the blank. The blank was first set dead centre and a cup turned hollowed and sanded as usual with the opening sized to accept the lid. The blank was then moved to an off centre position and the chuck re-tightened holding firm on the beaded tenon. The next part of the goblet stem was then turned and sanded and the goblet reset to centre to complete the rest of the stem. 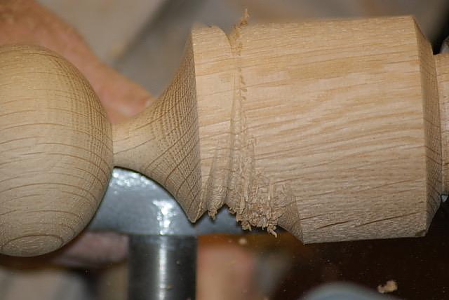 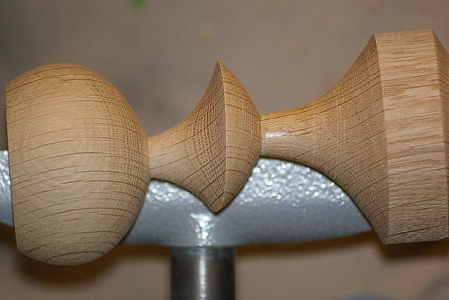 When parted off and the bottom cleaned up and sanded the goblet was united with it’s lid. 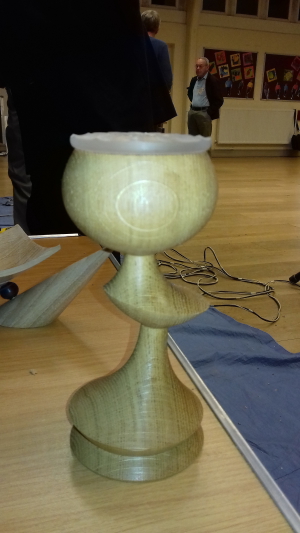 The second project was a combined square section earring bowl and ring stand. A square section blank was set between chuck jaws and a revolving centre and an spigot created in what will be the top of the bowl. This was reverse chucked and the outside of the bowl turned to a cone shape leaving the four corners in place. 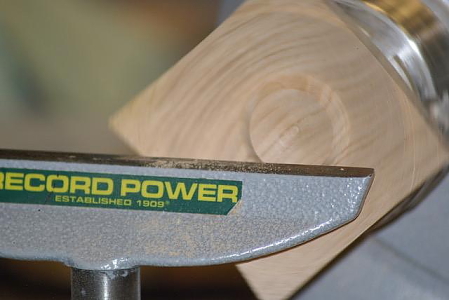 A small tenon was turned into the cone to fit the chuck jaws. The outside was sanded and then reverse chucked. The bowl was hollowed out again leaving the 4 corners and was sanded. A square section blank was then set between centres and turned to a cylinder which was then set in a chuck and turned to a long cone shape. The tip was detailed slightly for decoration and was sanded. The cone needed to be parted off but at an angle as close to the bottom of the bowl as possible. This was done with a tenon saw and the lathe stationary although Gerry did say that he usually does this on a bandsaw. 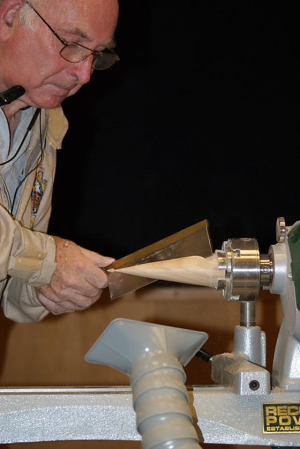 The base was sanded on a sanding block.

The next thing was to turn a connecting piece from a contrasting piece of wood. 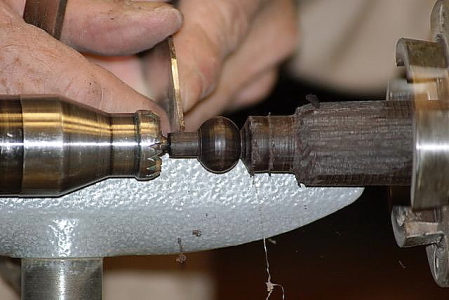 The critical point of this is to ensure the 2 tenons were the same diameter as the drill used for the holes that were created in the bowl and stand. 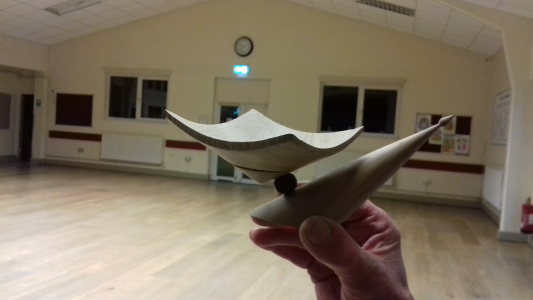 Once completed and sanded the bowl, stand and connector were assembled. 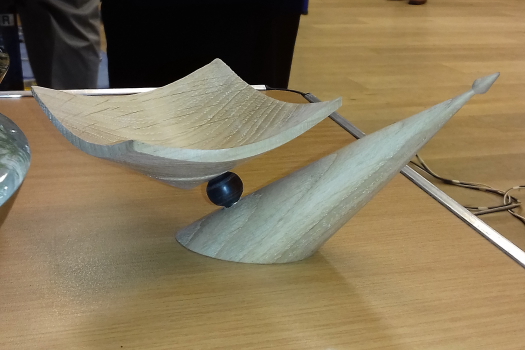 The third project was to make a very fine turned long thing (I did not catch what Gerry called it, sorry about that). A long piece of holly had been prepared to a square section on a planer/thicknesser and then the corners cut off using a jig on a bandsaw. This was fed almost fully into the headstock and fine finial like shapes turned in a short section. When that was complete the stock was moved out a short section and the next part turned and sanded. This was done until the whole piece was complete. Gerry used the tail stock to steady the piece by setting the empty quill over the end of the workpiece. It was recommended that the bore of the quill is cleaned before you do this as dirt etc could contaminate your work. 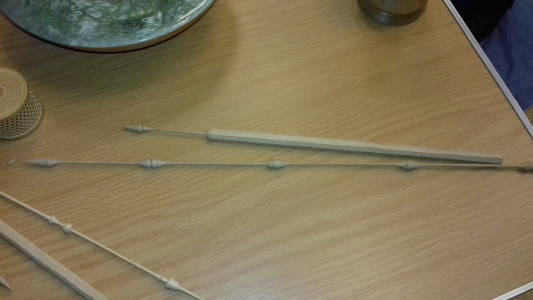 Gerry also showed some of his other creations which included items set in resin, if you want to try this do a test first as things like flower petals can go transparent. 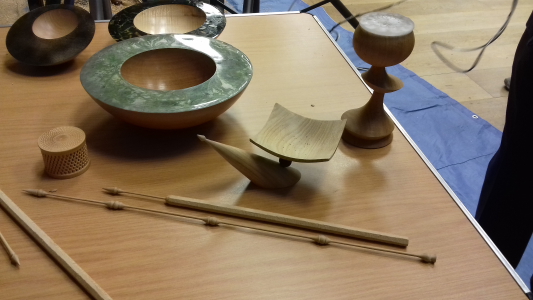 This was a feature packed demonstration and we all learned something and took some inspiration from it.

The September competition was very well subscribed with lots of varied and impressive pieces on show.

Second was Gerald Hubbard with a Banksia nut lighthouse, presumably inspired by the demonstration done by Gregory Moreton on the 1st August

Third place went to Marcus Buck with a burr bowl