Clem Ansell joined us for the evenings demonstration and after a brief introduction Clem commenced to demonstrate the making of a small lidded box that he makes as “Tooth Fairy Boxes” which have proved popular at craft fairs.

The manufacture of this box in sycamore follows the basic principles of box making with the lid recessed into the body. The body was hollowed out to accommodate a £1.00 coin and the largest of the child’s teeth. The outside was shaped to a pleasing form and finished with sanding sealer and carnuba wax which was applied directly to the work in this instance. With larger pieces of work he would not apply it directly as there is a tendency for lines to occur which are difficult to remove. Such pieces would be buffed using carnuba wax on a buffing wheel. 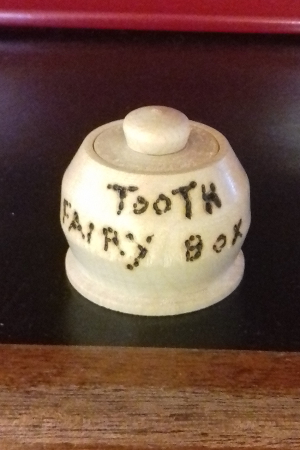 The final flourish was to pyrograph on the outside “TOOTH FAIRY BOX” or whatever other text or picture you want to show. With practice this can become a quick and satisfying project for craft sales.

The next item that Clem demonstrated was a hedgehog which doubles up as a pencil / crayon holder, ideal for a child’s desks etc. 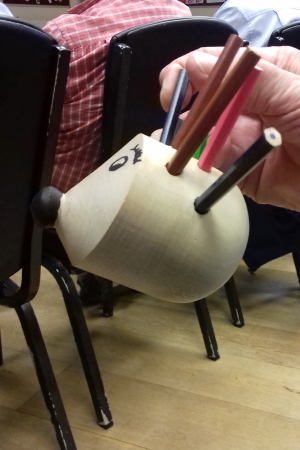 This project incorporated off centre turning which was interesting. The square section blank was mounted off centre to start with so that when turned it left a flat spot which will be where the hedgehog lies. (Although on this occasion Clem forgot this part of the process so turned out a cylinder). Once the blank is turned out, the end at the headstock is rounded off to create the rear of the hedgehog. Once sanded and finished the blank was set off centre at the tailstock end approximately halfway from centre to the outside. This is then turned to an angle to create what will be the face. 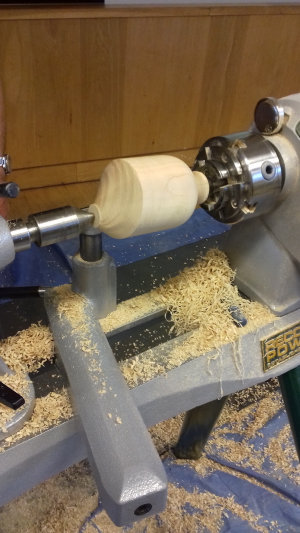 The nose is left as a button and once complete is sanded and finished. The nose is then blackened and eyes drawn on with a sharpie pen. The final operation was to drill several holes randomly in the back into which pencils can be inserted. 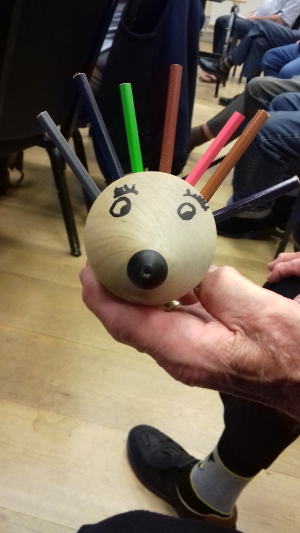 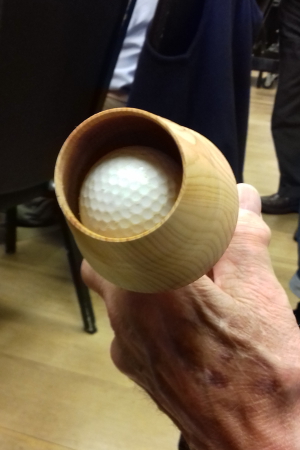 Unfortunately he ran out of time so could not finish the item but it did show how it was made. These have proved popular with golf clubs as trophies for “holes in one”.

Overall, although the projects were small ones, there was plenty of interest and tips that we can take away, practice and hopefully elaborate on.

There was another good turnout for this club meeting and we introduced the well known woodturner Gary Rance as the evenings demonstrator.

Gary started by giving us a brief introduction of his history in woodturning and his experiences.

The first part of Gary’s demonstration was spindle turning with a piece of square section pine set between centres. The first cut demonstrated was the pommel cut using his preferred tool, a round  skew. Gary went on to demonstrate the use of the skew to create V cuts and beads and also, interestingly, he intentionally induced a catch to show what not to do. Funnily enough he had to work hard to produce the catch, whereas most of us find this aspect quite easy. He also showed the turning of a cove using a spindle gouge. His top tip on making the cut was not to hesitate just make the cut, otherwise the risk of a catch increases.

The next subject to be demonstrated was faceplate turning. Gary made a round photo frame which used to be one of his production tasks. From one blank a series of frames in reducing size can be made. The blank was made as a glued up section of beech as this would be more stable than a full width plank. It was also kiln dried to minimise the risk of distortion after finishing. The blank was mounted on a screw chuck and trued up with a spindle gouge. The final cut was a fine shaving with the bevel of the tool rubbing, although it should not have any pressure so Gary prefers the term bevel floating.

The recess for the glass and the back plate was measured and turned out and the back finish sanded. This was then parted off using a thin parting tool used at an angle into the recess. The angle ensured that the frame did not fly off when parted though and remained captive against the chuck. The frame was then reverse chucked onto a scroll chuck in expansion mode although at home he would use wooded jaws. The face was trued up and the centre opened out until the recess was reached. The edge and the face were then decorated with beads and coves. Gary showed a way to quickly create a series of beads using a spindle gouge, not easy to explain but well worth seeing. This would then have been sanded and finished.

To further demonstrate the spindle turning already shown Gary set about making an “idiot stick” which is a 2 part puzzle stick.

This will not be described as it would give away the trick but needless to say it kept a couple of us guessing how it worked until the end.

Part of the decoration was to produce black lines on the piece which instead of burning with a wire were just coloured with a pencil. Does the same job but does not set off the smoke alarm. Gary also said that most production turners do not move the toolpost when sanding but sand from the back of the piece, and then demonstrated the safest technique for doing this.

The final part of the demonstration was a quick rundown of how Gary sharpens his tools.

Overall the demonstration was very informative with all of us taking something that we can use or develop. The presentation was given in a very informal and entertaining way and was enjoyed by everyone.

The June competition ended with a rare event in that there was a 3 way tie for first place. The honours jointly went to Clive Bryant with a vase and flower, Gerald Hubbard with a square edged bowl/dish and Mick Denton with a natural edge bowl. Congratulations to all three.