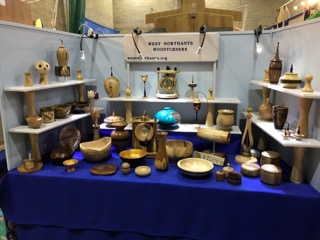 There were some competitions over the 2 days and the small box made with a threaded lid by Gerald Hubbard took second place. Another of the competitions was a tiered cake stand made by Roger Gilbert. It was decided that the cake stand should have cakes exhibited on it. This went down well with the judges who nicked one of the cakes. It was worth it though as this took first prize. Unfortunately the whistle made by Roger Gilbert and the scaled down spinning wheel made by Doug Johnson were unplaced, but certainly not for the want of trying.

On our stand was a segmented vase made by Geoff Warr and this lovely piece picked up the second prize overall in the show. An excellent result for a brilliant bit of work. (lot of work).

The final accolade was that we were awarded the best in show and the shield and certificates were presented at the club meeting on the 16th May.

The full results are shown on the Tudor Rose website.

A great job was done by all of those who helped over the 2 days and in the preparations for the stand. Well done those who made the pieces for the competitions and also thank you for all of those that contributed their work to be exhibited.

There was a good turnout for today’s meeting, with the demonstration being given by Colin Smith, who is the AWGB Regional Representative South East. Colin’s demonstration this evening shows an alternative way to create a hollow form vessel, based on a technique published by Richard Raffan in his book “Turning Projects”.

Ash Hollow Form Made In Two Sections – Colin explained the essence of the demonstration for the evening. When undertaking a hollow form project the hollowing part of it take up an inordinate amount of time. This can be reduced drastically by making the item in 2 sections and then gluing these together once hollowed. This mean that you can use spindle or bowl gouges instead of special hollowing tools. There is no time taken in clearing swarf from within the hollow form so unproductive time is minimised. The following is an overview of the process, not an instructional step by step guide.

Colin first prepared the log by cutting it in half on the band saw. This was to make sure that the grain can be matched really closely at the glue up stage.

Each of the 2 sections were mounted in turn between centres and turned to round, rough shaped and a tenon created for the chuck.

The mating ends were measured to determine the optimum diameter that the glue tenon and mortice could achieve.

The bottom section was mounted in the chuck and the mating face trued and squared. This needs to be accurately flat so that the glue joint does not show. The predetermined diameter for the tenon was marked on the face and a 1mm deep tenon created. The blank can now be hollowed to the desired thickness using a spindle or bowl gouge as you would with any end grain hollowing.

This piece can now be removed from the chuck and the other section mounted. The process on this section was the same as for the bottom except that instead of a tenon a mortice is created to match the tenon on the bottom. The last bit of the hollowing would run out into what would be the spout of the piece.

In this instance Colin did not complete the hollowing or gluing processes so allowing time to show the finishing. In true “Blue Peter” fashion Colin produced one he had made earlier up to the point of being fully glued and dried.

This piece he mounted in the chuck with the tail stock brought up to ensure centralising of the piece. The outside of the form was cleaned up and the final shape of the vase was created.

To disguise the glue joint further Colin produced 3 small beads using his “home made” beading tool. This was made from a ¼ inch spindle gouge that had become too short. It was ground off straight across at 45 degrees(ish) and because the shank was round could be rocked gently in use to create a nice bead. The first bead was made with the valley dead on the glue line, this must be accurate to make the best of the camouflage effect. Any further beads are made using the adjacent valleys to define the position.

To enhance the beads further Colin used a knurling tool to create a texture on the beads, being careful not to damage the adjacent beads. Any slight tear out can then be cleaned up and the piece sanded and finished. Colin usually finishes his work with a carnuba/beeswax mixture, however, because of time constraints the sanding and waxing were not shown.

There were various other completed pieces that Colin brought along to show the standard that could be achieved.

This was a thoroughly entertaining and informative demonstration which should give us all ideas and insights into what we can achieve in our future projects.

One very serious point that Colin made during the demo was to do with shop safety. Recently he was working on a piece of sycamore which, when the bark was being turned away, produced lots of black soot like dust. Because he was using a filtered face shield that did not matter too much. He completed his work and went into the house, still all ok. However, when he went back to the workshop to clean up he disturbed the dust which he breathed in. This put him in hospital with serious breathing difficulties, so the moral of the story be very careful with your ppe and ensure that you keep yourself safe  even when cleaning up.

There were lathes all over the place today, some heading to vehicles for eventual transport to Daventry Woodworks and three of them being set up for the Three Turners May Showdown.

While the demo lathes were being set up, this meeting’s competition pieces were laid out, chairs set up – and, of course, the tea urn switched on to complete preparations for the evening’s activities.

At the end of the evening, the Daventry-bound lathes and a goodly number of pieces for the club stand at Woodworks were loaded into their transports and we all went our respective ways.

3rd As well as the flowers and the vase, Clive has managed to insert some segmented work into this nice display set.

….and a picture of the table with some other items

Demonstration by The Three Turners – Mick, Gerald and Roger

With Mick on the Poolewood, Gerald on the Coronet Herald and Roger on the Axminster, all very different lathes, the task was for each to produce a goblet from the supplied – and particularly nice – yew branchwood. All three turners have different styles and it was interesting to see them each go about it in their own ways. There was, of course, no element of competition whatsoever!

Concentration levels were high both behind and in front of the lathes and the time flew by until it was teabreak and raffle time. Mick, unfortunately, went through the bottom of his goblet and had to start again, but he recovered well and his second attempt was commendably brave with a thin stem and a pleasing shape to the cup.

After refreshment the trio continued, with Roger the first to finish, but all three completed very nice goblets within the time available and were given a good round of applause for their efforts.

As mentioned above, the level of concentration from the turners and the degree of attention from the audience was notable throughout the demo; it really was an excellent demo. Many thanks to Mick, Gerald and Roger for their efforts.